Islamabad, Jan 14 Prime Minister Imran Khan has said that ‘external elements’ are behind the turbulence in the tribal areas of northwestern Pakistan. These tribal districts were formerly part of […]

Tehran: Iran’s supreme leader has agreed that people killed in nationwide unrest last month who had no role in fomenting it should be treated as ‘martyrs’ with their families compensated. […]

After three weeks of violent protests ignited by his disputed re-election and withdrawal of army and police backing, Bolivian President Evo Morales resigned on Sunday, “I resign my post as […]

Hong Kong’s government may censor the internet in a bid to contain months of increasingly violent pro-democracy protests, a cabinet member said Monday, after an emergency-law ban on demonstrators wearing […]

Can political unrest in Hong Kong break its currency peg?

Three months of anti-government protests have thrown Hong Kong into its deepest crisis in decades, pounding the financial hub’s economy and stock market and adding to its Sino-U.S. trade war […]

Hong Kong: The Chinese army has released a promotional video for its Hong Kong-based troops at a time of uncertainty over whether the military will intervene in the city’s summer of […] 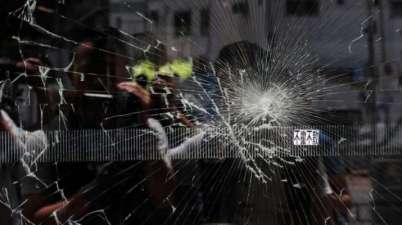