Genetic testing is coming of age, but for consumers it’s buyer beware 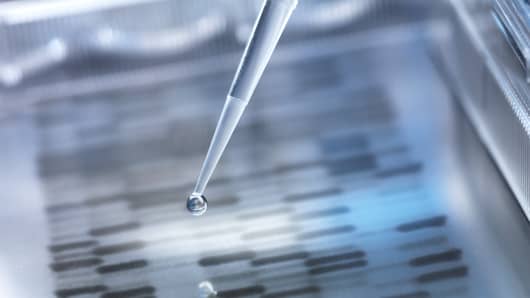 It’s becoming more and more common for patients to choose genetic tests that assess risk for diseases such as breast cancer, Alzheimer’s, Parkinson’s, diabetes and other conditions — especially if there’s a family history. Yet because some of the tests focus on wellness rather than specific disease diagnoses, insurance can be limited. Doctors and other experts say it’s very much buyer beware.

Actress Angelina Jolie has become a poster child for preventative medicine through genetic testing after opting to test for a mutation of the BRCA1 gene. Jolie, whose mother died of ovarian cancer at age 56, chose to undergo a double mastectomy followed by removal of ovaries and fallopian tubes when she tested positive for the mutation in the BRCA1 gene. Prenatal genetic testing also has become increasingly common, especially for Down syndrome, cystic fibrosis and other chromosomal abnormalities.

While insurance coverage for genetic testing is currently limited and variable, there’s increasing coverage for some genetic tests, such as testing of children for conditions such as galactosemia, phenylketonuria and severe combined immune deficiency. The Centers for Medicare & Medicaid Services also recently increased expanded coverage to include genetic diagnostic laboratory tests for patients with advanced cancer, citing the usefulness of such tests to help oncologists make more informed treatment decisions.

Driving this sea change in personalized medicine has been a dramatic drop in the price of genomic sequencing, an explosion in the number of companies introducing new genetic tests and increasing consumer comfort with the concept. The price of whole human genome sequencing dropped from $2.7 billion in 2003 to about $100 today.

“There are now over 75,000 genetic tests — that comes to over 10 new tests that enter the market every day, which is both good news and bad news,” said Kathryn Phillips, professor of health economic and health services research at the University of California San Francisco and lead author of a study on the growth of genetic testing that was published in Health Affairs.

The costs of these tests has dropped significantly, now typically ranging from under $100 to more than $2,000, depending on the kind of test and complexity.

The explosion of the genetic testing market comes with plenty of pros and cons, said Phillips. While many of the ideas that new tests may well be beneficial to patients, “it gets very confusing for consumers, patients and providers to sort through. It’s really the Wild West right now in terms of how to deal with this tsunami of genetic tests,” she said.

The global genetic testing market is expected to surpass $22 billion by 2024, according to market research consulting firm Global Market Insights.

A growing number of companies are offering just that. One is Arivale, a Seattle-based start-up that offers genetic testing with health coaching for a monthly fee of $199. To get started, customers go through an initial consultation that involves DNA, blood, saliva, urine and a questionnaire. Once the results are back, customers are paired with a health coach to help interpret the results and offer lifestyle suggestions and support. Arivale said personalized advice can help customers determine the best diet for them or effective exercise routines.

Clayton Lewis, one of the co-founders of Arivale, likes to offer up his own experience. A triathlete, Lewis has been a longtime health nut and was confident that his blood work and genetic testing would confirm that his healthy lifestyle was paying off. What he learned instead was that he was prediabetic. As it turns out, he had recently started cutting out carbohydrates in favor of the paleo diet, which eschews all grains and legumes in favor of a diet consisting mostly of meat, vegetables and some fruit.

Through genetic testing, Lewis learned that he is heterogeneous for the FTO variant, which means it is difficult for him to process the paleo diet. His CRP — a measure of inflammation — was also high as a result of a diet that was inappropriate for his genetic predisposition. His coach said that what he needs instead is a diet full of rich, dense complex carbohydrates.

Taking a different approach is Helix. Helix sequences your DNA and then stores the data like a “genomic wallet.” Customers can then opt to buy various diagnostic tests through its marketplace to assess genetic predisposition for high cholesterol or diabetes, food sensitivities, ancestry or other tests as they become available.

There are also companies such as AncestryDNA, which tests DNA for $99 and offers insights about ethnicity. 23andMe also offers information about ancestry and earlier this year received FDA approval to offer tests measuring genetic health risks, such as BRCA1/BRCA2.

When James Lu, one of the co-founders of Helix, started a career in genomics, he quickly saw the potential.

“It’s evident that sequencing data would be valuable for everyone to have — for sick and healthy people. With the price point of genomic sequencing in the $100 to $200 range, it’s brought us to genomic medicine in a way that’s historically never been possible. Increasingly over time it will become the standard of care,” said Lu.

There could be much usefulness from the tests, but it’s up to individuals to figure out their usefulness. There are websites at the Centers for Disease Control and the National Institutes for Health that offer some information on which tests are most useful. But for the large part, people are on their own to find that information or find expert help, such as a genetic counselor.

The upsides to genetic testing can be quite appealing, but as the field of genetic testing grows, there are also tests for general wellness or entertainment, such as understanding your ancestry, which have little or no medical applications.

Insurance tends to cover the most medically useful and straightforward. This would cover genetic tests for rare or monogenic diseases, such as cardiomyopathy, hereditary cancer or epilepsy.

“With the price point of genomic sequencing in the $100 to $200 range, it’s brought us to genomic medicine in a way that’s historically never been possible.”-James Lu, co-founder of Helix

“For complex traits such as diabetes, coronary artery disease or obesity where there are multiple genetic and environmental factors at play, genetic testing is less useful,” said Heidi Rehm, chief genomics officer at the Center for Genomic Medicine at Massachusetts General Hospital.

Interpreting genetic tests also takes skill and experience, a specialty that not all doctors, or health coaches, are ready to take on. A recent study that surveyed 488 doctors in the New York City area found that only 14 percent reported feeling confident they could interpret genetic test results.

“There are challenges in interpreting results. Each individual has thousands of DNA variants that are different compared to others. Some variants have no effect and some have severe effect. Research is often needed to figure out what those variants might be doing. Sometimes you find them and don’t know what they mean.”

Sometimes a genetic test result will come back indicating “uncertain significance.” And there are some doctors who have misinterpreted that information, telling patients that they’re positive or recommended inappropriate care based on these results, Rehm explained.

Like with any specialty or service, it helps to shop around or get second opinions. Patients can start by asking their doctor or health coach how much experience they have with interpreting genetic results.

Given the growth of genetic testing, it’s not surprising that genetic counseling has become a fast-growing field. According to the National Society of Genetic Counselors, a professional organization that represents genetic counselors, there are now 4,600 certified genetic counselors in the United States and Canada, a figure that’s expected to increase to 5,000 by the end of this year.

The number of genetic counselors has almost doubled in the last 10 years and is expected to grow by 75 percent over the next decade, said Erica Ramos, president of the society. Certified genetic counselors (look for a GCG, LGC or LCGC after the name) need to complete a two-year master’s program at an accredited program, then pass a board exam by the American Board of Genetic Counseling.

Of course, unlocking genetic information can also come with some potential downsides. Finding out you have a genetic predisposition to develop a deadly incurable disease can have real consequences — both psychological and financial.

For instance, someone who finds out they have an incurable disease, such as Huntington’s disease, may become uninsurable for life insurance.

“They just need to be aware that you can find out things with genetic tests. There are implications. It’s not just all fun and games,” said Lewis. Some people may want to know, while others don’t, but there are implications to consider before deciding to go with a genetic test. Also, while some genetic indicators are fairly accurate, some are still less clear. For instance, there’s a gene that some people think has some relationship to the risk of getting Alzheimer’s, but it’s not that accurate of an indicator.

Genetics, after all, aren’t a crystal ball into the future. Environmental and lifestyle factors play important roles as well. Companies offering genetic testing and health advice are hoping to change the way people approach health care.

“Real estate changed when Zillow came along. It used to be that the real estate agent had the keys to MLS service. Now with the internet, we have a very different relationship with Realtors. Likewise, the travel agency, for all intents and purposes, disappeared because data became democratized,” said Lewis. With genetic testing, “we’re educating customers about the impact of their life choices so they can now go and have very different conversations with their physicians.”